Nicola Giraudi has had great success in international agility over the last year. Giraudi, who is from Italy, and his Parson Russell Terrier, Twister, won medals in both the 2011 FCI Agility World Championship (Gold in Small Dog Individual) held in Lievin, France on October 7-9, 2011, and at the 2012 World Agility Open, held in Belgium on May 18-20 (Gold in the Individual Agility Pentathlon, Gold in Agility Games, Gold in the Team Agility Pentathlon, Silver in the Agility Biathlon). How do they do it? Recently I talked to him to find out!

Brenna Fender (BF): Tell me a little bit about Twister?

Nicola Giraudi (NG): Twister is now eight years old. I have had her since she was 50 days old; she comes from a small breeder in Italy. She unfortunately had to undergo surgery on both knees for patella luxation, but as you can imagine she recovered perfectly and never limped a single day after!

BF: How long have you been doing agility?

NG: I’ve been doing agility since 1992 and competing since 1993. My first dog was a German Shepherd, followed by Border Collies, and I also have a Sheltie now.

BF: What do you do for a living?

NG: I am a professional dog trainer. I teach agility and obedience and run the dog school Oh My Dog!!! together with my partner, Francesca. We also breed Border Collies and Shetland Sheepdogs.

BF: Tell me about some of your accomplishments. Are there ones you are particularly proud of?

NG: My first Border Collie represented Italy at the FCI Agility World Championships for four years, and the Obedience Worlds for seven years; she is the only dog in Italy to be both an Obedience and Agility Champion. She also was Flyball European Vice-Champ. With Twister I’ve been a two times Swiss Champion and once [I was] third (when living in Switzerland), she is an Italian Champion, we twice won the European Open, and we are actually World Champions, plus winning other major competitions like the Frontline Combo Trophy and the Austrian Winter Cup.

BF: Very impressive! In general, how often do you and Twister train and for how long? What do you focus on?

NG: Well that is a common question with a very uncommon answer: we never train more than once a week and when the weather is very hot maybe once every two weeks. Twister knows her job very well and has a cool mind; she doesn’t need to be trained, it’s more for me! We keep our contacts consistent and focus on details and handling solutions/variations to get the best running times. But I don’t think we ever train more than 10 minutes.

BF: Wow! Have you had any particular challenges with Twister in training and trialing?

NG: Well, Twister was quite hard to keep motivated and the biggest challenge was to channel her energy in the direction I wanted it to be. It took 4 1/2 years until she was like she is now, but it has paid off!

BF: Do you use a specific handling system?

NG: Yes, my handling system is very similar to the Finnish one, with some differences. I think it’s very good for the dog to have a handling system as he gets information he can understand, therefore being happier, faster, and more consistent.

BF: Would you tell me more about the Finnish handling system? In the US we are pretty much divided between Linda Mecklenburg’s Awesome Paws system and Greg Derrett’s system.

NG: This handling system has been started by Janita Leinonen and is focused on strong pre-cuing and use of body language to help the dog understand where we want him to go after a specific obstacle before attempting it. The idea [is] to let the dog perfectly know where you want to go and is therefore named One Mind. My handling way was already very similar to that system as I have always been striving for the most effective way to communicate with my dog through the course, so when I got in touch with Janita and Jaakko [Suoknuuti, Janita’s partner], I found a very consistent handling system that could be merged to mine!

BF: Very interesting! How do you handle the mental side of competing at international events? Do you find them very different from local or national trials?

NG: I actually need to get some pressure in order to perform at my best; I need that adrenaline to flow to get the highest concentration on my run. They are actually different because I’m running against the best people out there and it’s the biggest motivation for me to do my best with my dog and try to get in front of all of them. I really love those events! I don’t get stressed but I get charged up and full of energy!

BF: Did you have any difficulty competing at both international championship events?

NG: Luckily not! It was great fun in both!

BF: Did you enjoy the WAO? What were your favorite aspects of the event?

NG: I found the WAO amazing! It’s nice to be able to run many courses in a day, having more judges and therefore different styles. The organization was very good and the atmosphere is great; it’s like a big agility party.

BF: What was your favorite course?

NG: Probably Lee Gibson’s Agility 1 from the Individual Pentathlon on Friday. A bit too tricky for many as first course, but just the kind of course I like, where you need technical skills and speed.

BF: Do you plan to attend the WAO next year?

BF: Thanks so much for talking with me. Good luck with your next international endeavor.

For more information on the World Agility Open, visit www.worldagilityopen.com or look for the WAO Facebook page: www.facebook.com/pages/World-Agility-Open-Championships. 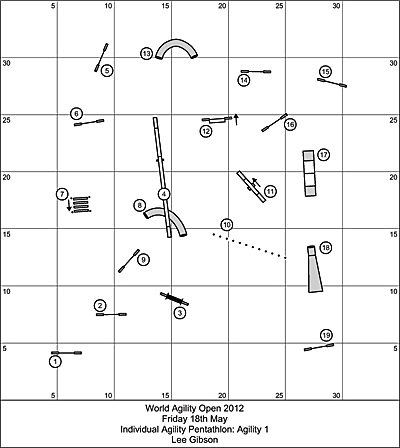