Near Tragedy at a Trial

I am one very lucky person. So many things went right that if it happened differently I would not be here today.

I took a day of vacation to run Friday, April 30, at the Cleveland Shetland Sheepdog Club’s first three day trial weekend of the year, held in North Olmsted, Ohio. I had run my Bearded Collie, Zoom, in Standard; we qualified. It was about 9:30AM. I took Zoom out to exercise him, and then went back to the crate and gave him some food. I hadn’t eaten anything yet that morning, so went to the snack bar and bought a coffee and donut. I was eating my breakfast with some friends when I felt my throat tightening up. It was getting harder to breath. I excused myself and went outside for some fresh air. That didn’t seem to help. I remembered that my wife, Sharon, caught a bug the previous Sunday that caused her glands to swell in her throat. I thought I had caught what she brought home. I tried calling her at home since she wasn’t entered in the trial, but I didn’t get an answer.

I decided to go back into the building instead of staying outside by myself. While walking to my set up, everyone was commenting how badly I looked. I sat in my chair and decided that I would run JWW and go home immediately after my run. I figured I could do anything for 30 seconds.

One of the people that saw me went and got a doctor that was entered in the trial. She came over to me and asked about my condition. She thought it may be an allergic reaction since my throat was swollen. I was getting worse by the second. She left. I later found out that she went to see if the facility had a defibrillator. They didn’t. (Our club has now decided to buy an AED and have at it all of our trials.)

While she was gone I went into a seizure. My friends starting yelling “Dial 911!” Lucky for me, the woman set up literally five feet away ran over. It turned out that she is the head nurse on a local helicopter life flight. Another nurse ran over who works in an ICU unit. The doctor ran back with a third nurse. I had no pulse or any vitals. They immediately started mouth to mouth and CPR. They took turns working on me and continued for 11 minutes until the EMTs from the fire department showed up.

The EMTs used the defibrillator to administer the first shock. No response. They increased the power and shocked me a second time. This time, I’m told, I sat up and tried ripping the tubes out of my throat. I was placed into the ambulance for the four mile ride to the hospital.

I woke up in the ambulance and started answering questions but quickly went back under. The next time I woke up I was headed into a CAT scan machine. I recognized where I was and heard the staff yelling, “Stay still!” I clutched the rail and passed out again. Then I woke to pain in my leg. When I looked up I saw the back of a monitor. I looked at my leg to see a person in a mask pushing on it. I tried to kick him off of me. There were more yelling to stay still and for the doctor to give me more whatever it was to knock me out. He was in the process of inserting the first of two stents in my aorta.

Sharon arrived just as the surgery was finished. We live over an hour from the hospital. I learned I had a 100% blockage of the aorta. They call it “the widow maker.” People usually feely sleepy, go to sleep, and never wake up. The survival chance is less than 6%. Because of the people at the trial caring for me, there is no brain or organ damage.

Meanwhile, back at the trial, the debate was who was going to run Zoom. My friend and neighbor, Ann, was the most likely person. Because of the commotion happened within a few feet of Zoom’s crate, he didn’t want to come out, let alone run. Ann took a picture of Zoom on her phone and sent it to her psychic. She told her to talk to this dog and tell him his owner is going to be all right. Ann walked the course and came back to a willing Zoom. Zoom double Qd Friday and went on to QQ both Saturday and Sunday. That was his 22nd, 23rd, and 24th QQ this year. It was the 28th time he got three QQs on a three day trial weekend. Now less than 100 points to MACH11. It will be fun to watch Sharon run Zoom and especially the MACH victory lap that she has yet to experience.

I was told Saturday that I would be going home on Tuesday. The doctor came in on Sunday and said, “You’re doing well enough, you can go home Monday.” The other great news was that I can expect to be back running agility in two months.
I had a continuous parade of exhibitors through my room the entire weekend. The club bought a T-shirt that everyone wrote signed and gave their well wishes. My friend and one of the judges for the weekend, Dave Hirsch, gave updates each briefing on my status. 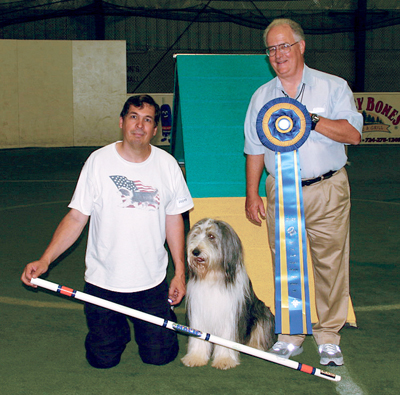 If I had gone to work instead of the trial, I would not be here.

If I tried to drive home instead of staying for JWW, I would not be here.

If I didn’t have such great agility people near me, I would not be here.

If I didn’t have the best wishes of the Beardie agility community, I would not be here.

Thank you everyone for thoughts and prayers. It worked. You guys sent so much white light I woke up with a suntan. If it’s not a suntan, it’s burn marks from the defib paddles.

Celebrate life. I am.