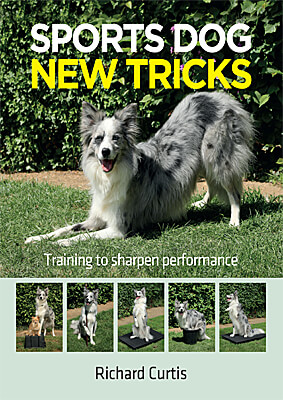 Trick training is a fun activity for both you and your dog, but do you have time for it when there is so much to teach in your chosen discipline? The answer should be an emphatic yes! Trick training can play a crucial role in enhancing performance in your chosen sport.

Top international canine freestyle handler, Richard Curtis, has devised a series of tricks, especially for competition dogs. These tricks are designed to fine-tune both mental and motor skills. His step-by-step advice is backed by a wealth of illustrations to show you precisely what to do.

There are tricks to develop:

There is also a series of low-impact tricks for older dogs and for dogs that require rehabilitation.

Richard’s instructions are easy to follow, and with his expert guidance, you can enjoy fun training sessions while building your dog’s mental strength, confidence, and fitness. The book is superbly illustrated with more than 300 color photos.

About the Author
Richard Curtis is one of the UK’s leading handlers in heelwork to music/canine freestyle/dog dancing, as well as being a top-level competitor in both sheepdog trials and obedience. He has won the Crufts freestyle final a record four times with Disco 2006, Pogo 2010, 2011, and Whizzy in 2014. In addition, he won the international freestyle competition at Crufts in 2011
and 2014. His interest in training started when he was nine years old and finally persuaded his parents to let him have a dog. This started him on the road to competing in obedience as well as teaching.

It was his Border Collie, Sybil, who first got him interested in trick training. Like a true Border Collie, Sybil had a great thirst for work, and the obedience exercises proved too easy for her. Richard discovered that teaching tricks was the perfect challenge. Tricks were fun to do, and they engaged her considerable brain.

Richard has gone on to train a variety of breeds, both large and small. He has refined his methods over the years and now works worldwide as an instructor. His workshops are in huge demand, and thousands of handlers have benefitted from his teaching. Richard is also a highly respected judge of heelwork to music/canine freestyle and officiated at Crufts finals in 2007, 2012, and 2019.