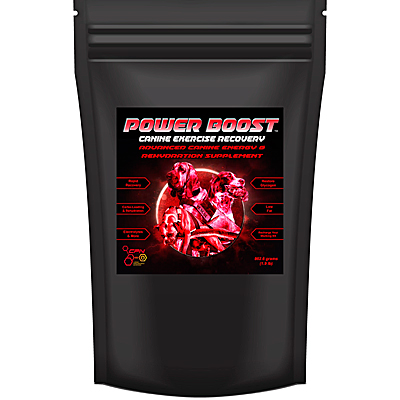 Power Boost is a high-carbohydrate, low-protein, and low-fat advanced canine energy and rehydration supplement that's designed to quickly stabilize blood sugar levels and replace glycogen stores, improve recovery time between periods of exercise (such as competition runs in agility), cool your dog, and increase water consumption. Power Boost uses a food-grade complex carbohydrate source that dissolves in water; by combining Power Boost with a liquid, it is absorbed more quickly into your dog's system. This is critical for a working dog that is involved in sprint activities and relies on bursts of explosive speed or power.

Power Boost is specifically designed for use in hot weather by agility, flyball, schutzhund, disc, racing, weight pulling, hunting, and other performance dogs. For dog that tend to "run hot," Power Boost will help them run cooler and recover faster. When a dog in good physical condition runs hot, it is caused by insufficient amounts of glycogen stored in the muscles and liver; when that's used up, it causes rapid drops in blood sugar levels. Also, because carbohydrates are being rapidly metabolized, lactic acid production in the muscles increases, which is undesirable. Power Boost is designed to prevent these problems before, during, and after exercise.

High amounts of glycogen-replacing glucose polymers along with creatine, glutamine, and more, make Power Boost the ultimate rehydrator and recuperation product to use before, during, and after exercise. But as with all new dietary products, we recommend trying Power Boost at home before you travel or compete to ensure your dog can tolerate Power Boost at the amount you intend to use it.

Using Power Boost vs. Vertex: Many canine trainers use Vertex on a daily basis and then switch over to Power Boost during a competition and during exercise in hot and/or humid weather. Power Boost has many of the same great nutrients of Vertex—creatine, glutamine, lactic acid buffers, Vitamin C, Vitamin E, and ginseng—but Power Boost has one-third the protein and fat of Vertex. In addition, Power Boost is intended to be used before, during, and after exercise; whereas Vertex is a daily supplement. When combined, the two products produce an amazing result!

100% satisfaction guaranteed with all CPN products. Click on the Ingredients tab for ingredients and a guaranteed analysis.

Power Boost is formulated for adult dogs. It is designed for rapid glycogen replacement and correct fluid balance after exercise. The feeding guidelines below are a starting point; you may have to experiment to find the correct amount for your dog based on individual body chemistry, temperament, and fitness level. When feeding Power Boost, always dissove in water and provide ample amounts of fresh drinking water to your dog.

Note: If you want to mix smaller amounts of Power Boost rather than a gallon or more at a time, note that there are 16 tablespoons in a cup and 128 ounces in a gallon. So for agility, for example, instead of mixing a whole gallon, you could use 1 tablespoon of Power Boost in 8 oz. of water.

If you pre-mix Power Boost, it should be good for a minimum of 1 week if kept at a temperature of 40ºF. 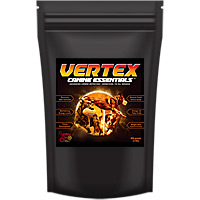