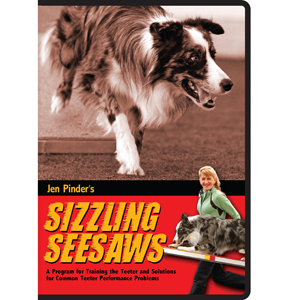 All dogs are different, and they all approach the teeter differently. Some are not comfortable with the motion of the obstacle, others don’t like the noise of the board, while for others it’s the height that causes a problem. Some dogs aren’t comfortable being (as they perceive it) “out of control,” and some revel in being out of control.

Now there’s an easy-to-follow, progressive program that will help you teach a terrific teeter performance to any dog, large or small. Over the past 12 years, Jen Pinder has developed a teeter training program that’s designed to teach the dog that he is truly in control of the motion. Part of being in control means the dog must know what is expected and how to do it. Through this training method your dog will learn to

• Mount the board straight on

• Run all the way to the end of the board

• Stay on the board in his end position until he is given a release cue.

While the program can be followed start to finish to teach new dogs the teeter, it is also designed to provide problem-solving support for trained dogs with teeter performance problems. An entire disc is devoted to solving problems such as dogs About the Author
Jen has been actively competitive in agility for over 17 years has put 8 ADCHs and several MACHs on her Border Collies, Jack Russells, mix breed, and Sheltie as well as being a three-time AKC World Team Member with BC Static. Jen is currently competing with her mix breed Taser, Border Collie Guilty, and her Sheltie Britain. Jen and Taser are the 16" 2011 National Steeplechase Champions. Jen was also on the podium with her Sheltie Britain, taking 3rd. She repeated the dual placements in the 2011 Grand Prix Finals, taking 2nd with Taser and 3rd with Britain. In addition to her skills as a competitor, Jen’s excellent teaching ability and ability to adapt to different styles of dogs makes her a highly sought after presenter/instructor across the country. Jen and her husband Bill reside in Lapeer, Michigan where she teaches for FiredUp K9s and Highest Hope Dog Sports. She also conducts seminars and workshops around the country.

Because of its size or weight, or special restrictions, this product can only be shipped via UPS Ground service, which is only available in the contiguous United States. This item cannot be sent to Alaska, Hawaii, APO, or FPO addresses, and it cannot be shipped to Canadian or overseas addresses.